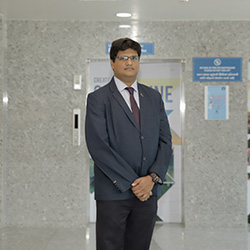 The Golden Second. A Life Saver

Time stood still for a young 48-year-old patient when he was diagnosed with severe case of hypoxia.

Having suffered from hematemesis and breathlessness, the patient was in a state of shock when he visited the Zydus Cancer Centre. The team of doctors at the Centre set the treatment afoot in a prompt manner.

A known case with a long standing history of liver cirrhosis and renal cell carcinoma, the initial diagnosis revealed that his haemoglobin count was extremely low at a mere 1.8 gm/dl. Moving in swiftly the medical team immediately shifted him to the ICU and started vasopressors on the go.

As luck would have it, soon after shifting to the ICU he had an episode of profuse hematemesis, where he vomited approximately 1.5 litres of blood. As was imminent a cardiac arrest ensued immediately after this incidence.

In a medical emergency, the golden hour plays a vital role. A cardiac arrest calls for quick action, failing which it can cause irreversible damage to organs like brain. Every second matters here.

The team at ICU in Zydus Cancer Centre pressed into action with immediate Cardiopulmonary Resuscitation (CPR). Effective CPR and timely action helped us in reviving the patient within 10 minutes and subsequently he was intubated and put on life support system.

Endoscopy was performed the following day, which revealed multiple erosions in esophagus. However, the silver lining in the story was that his hematemesis and haemoglobin count was now stable. After a long drawn 48 hours, the patient was extubated and eventually discharged from ICU on the 7th day.

Slowly, but surely and steadily the patient recovered and was ‘back on his feet’ on the 12th day. It was a heart-warming experience for the entire team to witness the patient walk back home without any support whatsoever.