A lady in her fifties was escorted in to my cabin by her son. The chief complaints as narrated by him were: cough with large quantity (copious) phlegm – filling 2 to 3 glasses per day and aversion towards spicy food as well as hot & cold beverages leading to around 5 Kg weight loss since last 8 months. He was showing me the blood reports stressing on elevated white blood cell counts and CRP levels, suggesting repeated infections or episodes of ‘pneumonia'. The alarm rang when his mother required injectable antibiotics a month back to control the symptoms and hence she was referred to a ‘higher’ center for further evaluation.

I studied the reports in detail. Her attending doctors were treating on the line of “Bronchiectasis" : a condition affecting airways leading to permanent and abnormal dilation where patient presents with copious sputum production, sometimes associated with blood and repeated episodes of pneumonia. However, there was no history of significant biomass fuel exposure, allergies or asthma, tuberculosis, childhood lung infections or pneumonia prior to onset of this illness. In addition, CT scan of Thorax done in September 2020 ruled out the possibility of bronchiectasis. However, there was evidence of pneumonia on scan – mainly affecting right middle lobe and superior basal segment of right lower lobe- so called sites of ‘aspiration'. The same findings were there in the scan done in-house 6 weeks apart. Hence, I admitted her for work up of “Non-Resolving Pneumonia".

The medical reasoning was : Though she has been treated for effective mucus clearance, the generation of same from lung was not explained. From Gastro-Esophageal reflux, weakness of muscles of swallowing, fistulous communication between food & wind pipe to tuberculosis and even lung cancer can be potential cause of her condition which needs to be diagnosed as early as possible.

She underwent bronchoscopy- a minimally invasive procedure for inspection of airways in which thin tube with camera at the tip is inserted through nose passing via larynx (voice box),which confirmed purulent secretions in right middle lobe bronchus. The respiratory secretions examination excluded possibility of tuberculosis or lung cancer. The endoscopy also ruled out possibility of gastro-esophageal reflux as well as any fistulous communication. However, both the scopies revealed a small but significant finding : pooling of thick secretions around pyriform fossa with swollen mucosa over arytenoids : the parts of larynx. 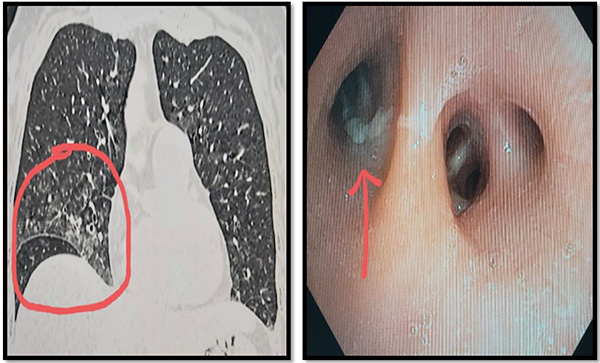 To answer that, ENT specialist was called upon. There was absence of ‘Gag reflex', meaning neuro-muscular pathology affecting muscles of deglutition. Her neuro-imaging revealed: a large (6.2cm × 5.7cm × 5.2cm) extra-axial mass in the brain compressing the right side of brain stem – the site of origin of nerves supplying the muscles of larynx clinching the final diagnosis of : ‘frequent aspiration pneumonia secondary to Space Occupying Lesion (SOL) of Brain (possibly meningioma/hemangio-pericytoma) with compression over brain stem. Neuro-surgeon was called upon to take over in view of possible rapid deterioration.

There was no history of headache/weakness of limb muscles/speech, vision or memory disturbance or abnormalities of gait which can point towards the brain abnormality. The only symptoms was drowning of respiratory tract with saliva – which would have been swallowed otherwise- leading to repeated aspiration pneumonia. 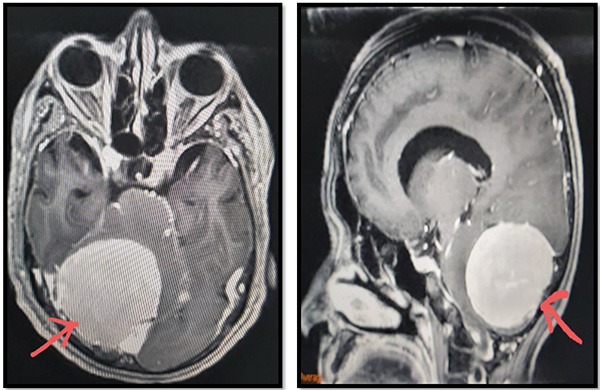 The son was quite surprised to know how the body works and systems are connected. Indeed, evaluating ‘non-resolving pneumonia' poses significant challenges and as evident in this particular case, the “Higher" connections of respiratory system played pivotal role. It was a unique presentation of potential life threatening condition which thankfully got picked up in short time due to dedicated & disciplined team work. I thank Dr. Tejas Modi & team (Dept. Of Gastroenterology), Dr. Lav Selarka & team (Dept. Of ENT), Dr. Aditi Raina & team (Dept. Of Radiology) and Dr. Kalpesh Shahsir & team (Dept. Of Neurosurgery) for their valuable inputs and support.