A School Boy With Recurrent Bone Tumour In Thigh

A school boy from bavla age 8 years presented at ZYDUS hospital with pain in right thigh and hip following playing cricket. On X ray child had fracture right upper femur bone where there was a large bony tumour. He was operated for this bony tumour in 2015 elsewhere with scrapping of tumour and titanium nails fixation.

We had operated with removal of titanium nails,scrapping of tumour(removal of tumour tissue),biopsy, fibula(leg bone) bone graft from both leg to fill the defect and plate fixation

During his last followup after 9 month of surgery his fracture was united, the tumour defect was filled with bone graft and no pain. He was walking normally attending school and was playing in some lite games. The child and parents were happy with the results. 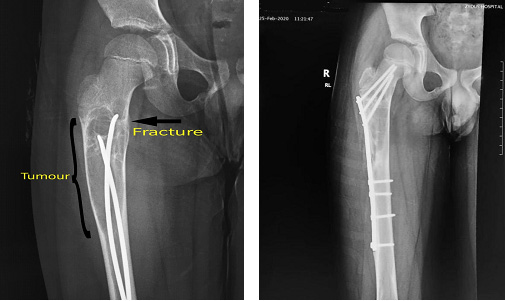