Back on his Feet

An elderly gentleman around 82 years hailing from Mumbai was on a social visit to Ahmedabad.

Just couple of days into his visit, he was unfortunate to have developed massive convulsive attack. The worried family rushed him to Zydus hospital as he was unable to stand.

Also a known case of chronic kidney disease (CKD), he had sustained bilateral transcervical intracapsular neck femur fractures, which is sparingly described in orthopedic literature – to simplify fractures on both the hips.

As we did the investigations needed, his x-rays indicated that his aged bones showed symptoms of severe osteoporosis.

A team of clinicians was involved which include a nephrologist and a physician – they must clear the patient for any surgery before we proceed considering the condition of his kidneys and of course the fragile age.

As the team cleared him fit, the orthopedic team under my headship operated him the following day. He underwent a bilateral cemented hemiarthroplasty in approximately (in simple words – Hip replacement for both the hips). The daunting task was accomplished in 1.5 hour. At that age, every minute could extra is like walking a thin rope.

The surgery was un-eventful and the gentleman stood with walking aid support on the 3rd day of surgery. It was a feeling of contentment that cannot be put in words, we all knew – we have not just saved a life but also changed many lives.

Post-convulsive bilateral fracture neck femur is very rarely described (mostly around 10 cases in international literature), but managing it by cemented hemiarthroplasty in single sitting is very rare and is not described in available Indian orthopedic literature.

However, we could find one case in international literature.

It is always challenging and demanding to do such hip surgeries in single sitting, but at ZYDUS HOSPITAL Ahmedabad where we have all specialities available round the clock with CCU facilities, hence we could successfully managed this case. 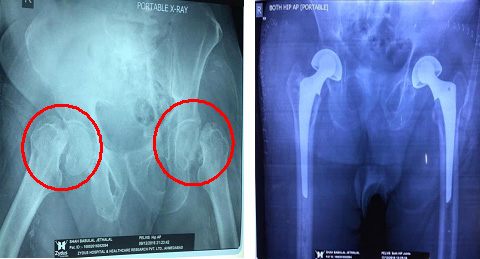