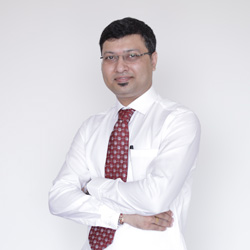 ‘You have to believe you can fight it’

This story is about a brave heart cancer survivor who was born in the land of warriors – Jodhpur, Rajasthan. I truly have come to believe that people of Rajasthan are inherently brave and strong. They are fighters.

A 38-year-old father of three girls was devastated when he learnt he had cancer. One morning, he woke up only to notice a slight swelling on the left side of his neck. Considering it to be normal and assuming it to settle on its own in a few days, he ignored it. A few weeks passed by but the swelling, instead of decreasing, had only become more visible. This caused panic in the family and they consulted their family doctor. The doctor thought these were the signs of Tuberculosis and advised him to undergo some tests. To his relief, the tests were negative and he was prescribed with routine drugs.

A few more days passed and he observed that, although painless, the swelling had increased in size. He was now getting worried. He consulted another doctor who suggested that he should undergo a CT scan of neck. It confirmed his fears; he was diagnosed with a possibility of cancer. He has multiple swellings – small to medium size – aka Lymph nodes on both sides of his neck along with a small lesion in Nasopharynx (an area behind nose). Further investigations confirmed it to be cancer.

When patients hear the word cancer they are stunned and so was the case with him when he visited us at Zydus Cancer Centre. He took a while to process this news. We had two tasks as hand, one was to strengthen him emotionally while preparing him the fight the battle and other was to actually fight the battle against cancer.

Post many sessions and self-realisation of being the sole bread-earner for the family, a father to three young daughters and a husband, he understood the importance of developing a fighting spirit and being strong. He realised that his survival mattered for the happiness of his family and being weak was not a choice.

We, at Zydus Cancer Centre with a multi-disciplinary team including Medical Oncologist, Head & Neck Cancer Surgeon, Radiation Oncologist and Nuclear Medicine Expert, discussed this case and chalked out the best possible treatment plan for him. We knew that the tumour, because of its position, couldn’t be operated upon. Hence, we began the intense chemotherapy session. After 3 sessions, the Post Chemotherapy PET Scan revealed that the tumour was gone. It was nothing less than a miracle.

It was a real booster. He was more hopeful and became even stronger. We subjected him to a long course of Radiotherapy along with chemotherapy sessions. Although the treatment is extremely difficult and draining, it all paid off. The PET scan after completion of the full process revealed good news.

Presently is disease-free and like most of the cancer survivors, he considers himself to be the luckiest person on this earth.

The world is full of such positive stories too. Cancer as a disease arouses fear but we need to understand that early detection along with a strong fighting spirit can do wonders.

As we recently celebrated National Cancer Survivors Day, here are a few key points that one should always remember: