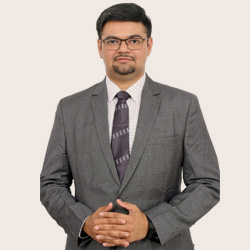 A retired teacher in her sixties was showing me her reports. The chief complaint was feeling short of breathe which is slowly increasing over past 2 years. She used to walk at least for an hour, which in last 2 months have been reduced to minutes disrupting her routine activities. However, she was quite literate & hence took adequate measures by consulting family physician, which on evaluation found systemic hypertension & borderline dyslipidemia. Though she was on medications & keeping blood pressure well within normal limits, her symptoms did not go away. She was finally referred to a cardiologist (approximately after 1 year of continuing medications), who after doing basic work up of ischemic heart disease- suggested coronary angiography- which turned out to be absolutely normal - leaving the question unanswered.

She was then referred to a Pulmonologist (Approximately 4 months after visiting cardiologist) , who ordered X-ray chest & screening spirometry (both normal) along with blood work up which revealed mild anaemia with Haemoglobin of 12 gm% & Arterial Blood Gas showing : Hypoxia with PO2 of 77 mmHg & Hypocapnea : PCO2: 29 mmHg. Referring to the old 2D echocardiography, he found pulmonary hypertension with Right Ventricular Systolic Pressures up to 65 mmHg & hence started her on diuretic & a venodilator - with no significant clinical benefit & hence referred to me for further evaluation.

According to the basic science, the circulatory and respiratory systems work together to sustain the body with oxygen and to remove carbon dioxide. Pulmonary circulation facilitates the process of external respiration: Deoxygenated blood flows into the lungs. It absorbs oxygen from tiny air sacs and releases carbon dioxide to be exhaled. Systemic circulation facilitates internal respiration: Oxygenated blood flows into capillaries through the rest of the body. The blood diffuses oxygen into cells and absorbs carbon dioxide. 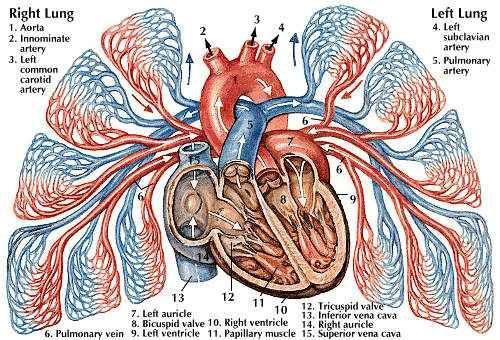 The European Society of Cardiology (ECS) & European Respiratory Society (ERS) clinically classifies PH as per its origin in to 5 (five) groups, like group 2 is : PH due to heart diseases, Group 3 is PH due to lung diseases & so on (see figure). 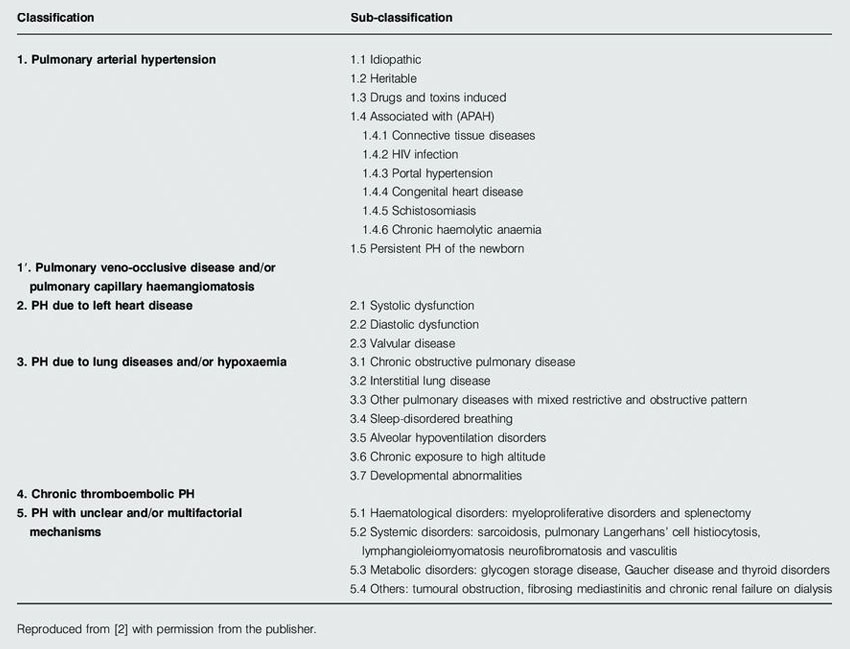 PH evaluation is many times challenging. My plan was obvious- to arrive at specific diagnosis after ruling out most probable & pick the most suitable. Well, Group 2 was already excluded, Group 4 was excluded with negative DVT screen & clean pulmonary angiography. Her demography profile, such as her age, residence, occupation, drug history was not contributory, except two episodes of nose bleed around 1 year back requiring ENT consultation. While her blood reports ruled out autoimmune pathologies or vasculitis, liver disorders as well as presence of viral etiologies (Group 1 & 5). Leaving possibility of Group 1' & Group 3.

Her HRCT thorax did reveal presence of subtle small (less than 5mm) ground glass opacities & mildly enlarged mediastinal lymphnodes with subjective appearance of smooth septal thickening in both lower lobes - however final reporting was favouring subacute hypersensitivity pneumonitis- which was not fitting clinically. On the other hand, advanced pulmonary function testing revealed, FVC of more than 1.8 Litres or 70% predicted, FEV1 of 1.3 Litres (60.5% predicted), TLC of 72.3% predicted, FRC of 75%predicted = all suggestive of fairly preserved lung volumes, however DLCOc & DLCOc/Va were significantly reduced - less than 50% - meaning disproportionate decrease - indicating that pulmonary vascular bed can be the cause of her PH & not only the lung pathology.

The finding was confirmed with right heart catheterization (See image below) which revealed mean pulmonary arterial pressure of 46 mmHg - the value associated usually with end stage lung disease - which is not in her case. The most probable mechanism then is a condition called Pulmonary Veno-Occlussive Disease/Pulmonary Capillary Hemangiomatosis (PVOD/PCH)- pathologies involving pulmonary capillaries and veins - which is very rare with incidence & prevalence of less than one case in million. The most important limitation in her case was risk of catastrophic bleed if bronchoscopic lung biopsy is attempted, due to very high pulmonary pressures leaving still the question unanswered. 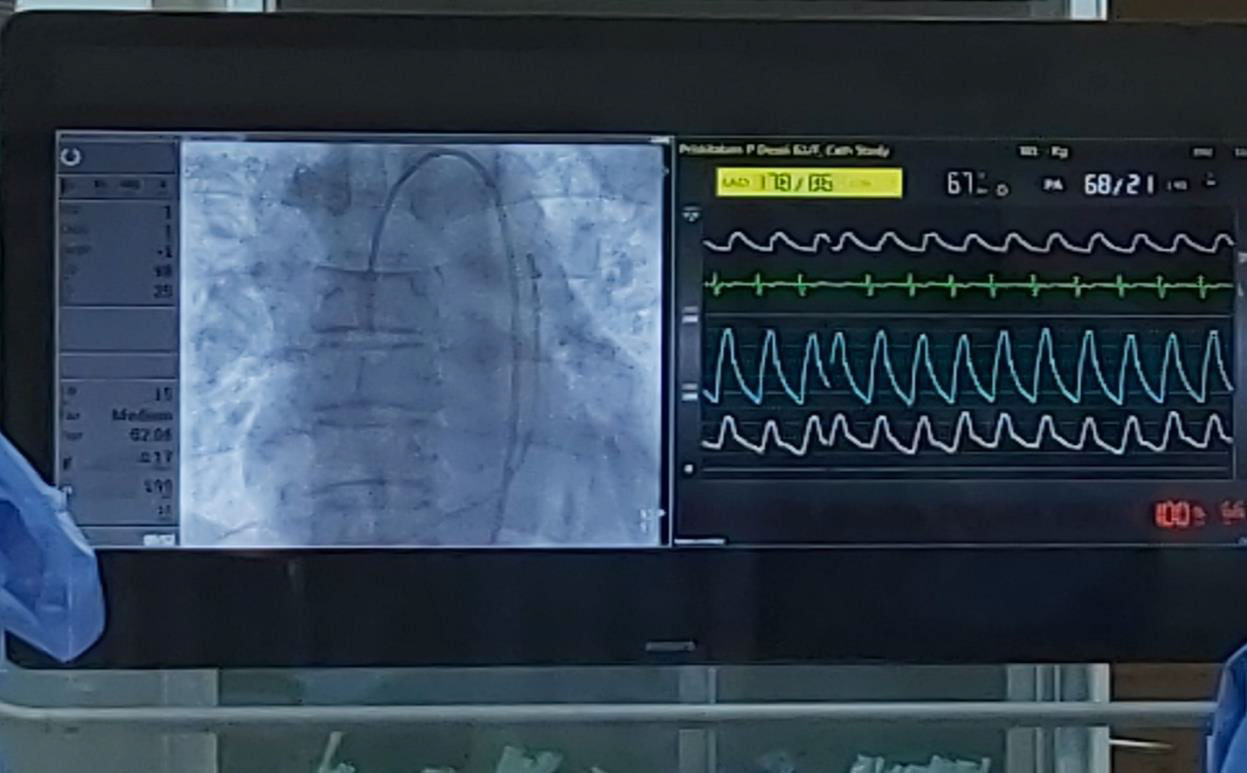 On one hand, I started treatment for hypersensitivity pneumonitis, while on the other hand, I continued searching for the options to prove the hypothesis of PVOD/PCH. On detailed examination, there were tiny telangiectasia on her tongue (See image below). Due to dark complexion of her skin it was not evident on body. This finding adding to her history of two times nose bleeds (epistaxis), while not being on any blood thinner & with normal blood pressure- was one of the diagnostic criteria of disorder affecting capillaries called "Hereditary Hemorrhagic Telangiectasia (HHT) or Osler Weber Rendu Disease". The most important inference of this finding was, if she has telangiectasia there, she might have as well in pulmonary circulation proving the hypothesis of PVOD/PCH. So, according the diagnostic criteria, she fulfilled 3 out of 4, arriving at a final diagnosis of severe PH (Group 1’) as a presenting feature of HHT. 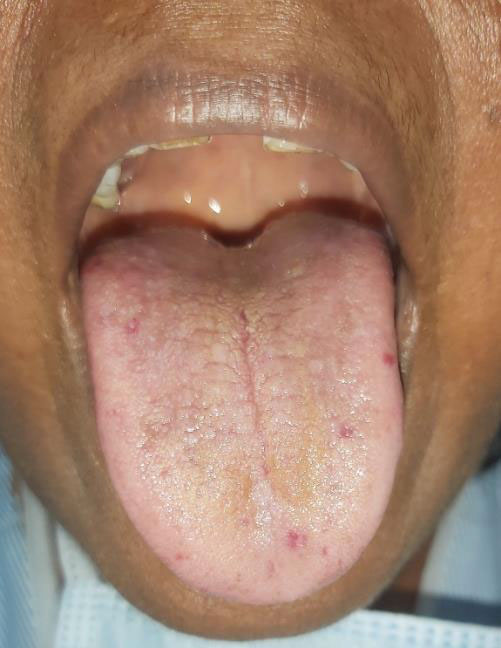 I explained everything to her, having tried my best & reaching as near as possible of final diagnosis & obvious limitations of further investigations. She was finally happy with that, as she found answers to her question, why so "breathless"?